CASA: Reuniting a Child with His Mother

By Laurence Kaldor, President of the VCLF 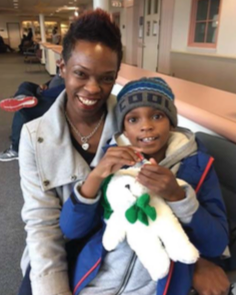 THE MISSION OF CASA OF LOS Angeles is to improve the lives of children in the dependency system by pairing them with trained volunteer advocates. CASA seeks to reduce and reverse the effects of child abuse and neglect. Nowhere in the nation is the problem greater than in Los Angeles County, where 30,000 children who have been abused or neglected are under the jurisdiction of the Dependency Court.

Over the past two years the VLCF has taken numerous opportunities in Valley Lawyer to praise the efforts of Court Appointed Special Advocates (CASA) and spotlight the positive impact they have on our community. As much about the often emotionally demanding and challenging work by the advocates or caseworkers, those stories are about the heroic efforts of the children and their families struggling to overcome adversity.

The story of Regan, a long-time CASA, and Jamari, an inspirational young man, is one of those stories. When a CASA is first assigned to a child’s case, they lay a foundation for their work by getting to know the child and their situation. Regan recalled that when first meeting Jamari, who was five years old at the time, he had already been in foster care for several months following a failed adoption. After Jamari was removed from his mother’s care, and extremely agitated, he began exhibiting violent behavior, which resulted in his expulsion from several pre-schools. Neither shocked nor surprised, Regan explained that, “even at such a young age, [Jamari] had expressed suicidal thoughts.”

The young boy’s situation was both heartbreaking and dire. Among the problems many troubled or at-risk youth face are their limited options and a system that seems stacked against them. Many indigent adolescents get lost in the system or buried in the bureaucracy.

In Jamari’s case, which is all too familiar, Tera—his mother, primary care- giver, and only adult relative in Southern California—was battling addiction and her own demons. Fortunately, Regan began advocating for a number of services to confront Jamari’s behavioral issues, secure a proactive educational environment, and arrange for his placement in a stable foster home.

Sadly, due to Tera’s personal battles with drug and alcohol addiction, it appeared as though Jamari and his mother might be permanently separated. Again, in an example of true advocacy, Regan, knowing how vital

the maternal bond is, was not willing to give up easily. To her, Jamari was not just a case number or failed delinquent to be shuffled and filed away. Regan made certain to stay in contact with Tera and closely monitored her struggles and efforts towards recovery.

The choice had to ultimately be Tera’s, but when Regan was convinced that Tera was determined and seriously seeking help for her addictions, she worked tirelessly to reunite Tera and her son. Over the coming months, Tera moved into a sober living facility and was actively making strides towards sobriety. Within a year, Regan was so impressed with Tera’s progress toward sobriety, that she petitioned the court to return Jamari to his mother’s care so that she could provide him with the emotional support he craved and to help him deal with his damaged spirit.

Today, Jamari is back living with his mother. “Jamari’s behavioral issues have vastly improved and he is

On December 22, 2016, Jamari received the best Christmas present ever when, sitting in Dependency Court, flanked by his mom on one side and his CASA on the other, he heard a judge officially rule his case closed.

CASA is supported by the generous contributions of individuals, companies, and organizations. The VCLF is proud to provide financial support to CASA and amazing people like Jamari, Tera and Regan.

“There are far too many Jamaris in the San Fernando Valley that need our love and support,” expresses VCLF President Laurence N. Kaldor. “We are grateful for the continuous support that Valley Lawyer readers continue
to provide. Unfortunately, there never seems to be a shortage of young people in need. However, with your sustained financial donations we have and continue to make a real difference in the lives of kids like Jamari.”