De’Shan Jones: An Inspiration of What Is Possible

By Laurence Kaldor, President of the VCLF

FOUR YEARS AGO, DE’SHAN Jones, then 15, didn’t think much of school. “I don’t know how I graduated eighth grade, but I did,” he remembers. “Going into high school, my mindset was ‘I’m just going to push through, do the four years, get a diploma, and that’s it.’ Then I’d get  a job at McDonald’s, something to pay the bills and cover the rent, and that would be good enough.”

His lack of interest was evident in his grades. In his first semester, he failed four courses and wasn’t even on track to get a diploma. That’s when he serendipitously was assigned volunteer Court Appointed Special Advocate (CASA) Rosemary Enzer. 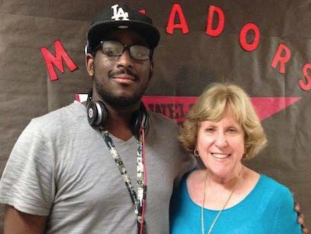 They appeared to be an odd couple—an African-American teenager and a white retiree. De’Shan continually mistook Rosemary for just another social worker, while Rosemary, a former elementary school teacher, could see immediately that the young man was in a bad place. “He had a terrible attitude,” Rosemary says. “He was extremely depressed, but then who wouldn’t be after everything he had been through?”

The trouble started a few years before, when De’Shan’s great- grandmother—who had adopted him when his mother couldn’t care for her kids—passed away. He had been in foster care ever since, separated from his siblings. Rosemary could track many of his problems in school to

a simple function of his depression. However, instead of diagnosing things and laying out a plan of action for De’Shan, she listened while, over time, he shared why he was having trouble.

“I didn’t really think I had any problems, but after a while I started noticing what I was doing,” De’Shan says. “I wasn’t going the extra mile to understand the material.”

Once the light bulb switched on for De’Shan, the veteran educator in Rosemary took charge. She set up meetings with his teachers to see what he could do to pass his classes and made sure he was committed to the tutoring she had arranged for him. All the while, she was in constant contact with his teachers, emailing many of them weekly or even daily.  Gradually, De’Shan’s grades improved and he took on more activities. By his junior year he was earning A’s. He became the mascot of his school’s football squad and was named captain of the swim team and even recruited and fundraised for it.

As his senior year progressed, another opportunity came into view. “At first I was really hesitant

about college,” De’Shan says. “I was just going to go to community college and call it a day. But Rosemary really recommended it. She encouraged me to apply to other universities.”

In February, De’Shan got an email from Cal State Northridge with news that he had been accepted. He later received acceptance letters from several other schools, eventually opting to attend CSUN because it’s close to home and one of his social workers also studies there.

Now, a couple months into his freshman year, he’s taking 15 units— including English literature, advanced mathematics and computer science—and living in a dorm. On the weekends, he goes home to his foster family, with whom he has become very close. His foster mother now calls him ‘son.’

De’Shan has taken advantage of California’s AB 12 law, which allows him to remain in foster care until he reaches the age of 21. As for Rosemary, she expects to be taken off De’Shan’s case soon, but she says she’ll always be in touch with him. The two of them still get together for dinner on occasion and she checks on him with frequent texts.

“His responses are usually no more than one word when I ask, ‘How are you doing?’” His answer: “Awesome!”

The mission of CASA of Los Angeles is to improve the lives of children in the dependency system by pairing them with trained volunteer advocates. CASA seeks to reduce and reverse the effects of child abuse and neglect. Nowhere in the nation is the problem greater than in Los Angeles County, where 30,000 children who have been abused or neglected are under the jurisdiction of the Dependency Court.

CASA is supported by the VCLF and the generous contributions of civic-minded organizations, companies and individuals like Rosemary Enzer.